High Littleton was probably settled by the Saxons in the late 7th or 8th century. They called it Lytel tun.

Hallatrow may have been much older than High Littleton. Joseph of Arimathea is supposed to have come to Glastonbury soon after Jesus’ ascension. While resting at Wearyall hill, it is said that he stuck his staff into the earth and, although made of dry hawthorn, it grew and flowered each Christmas day thereafter. This could be the origin of Halig treow ( holy tree ) or Hallatrow.

By the time of the Domesday Survey in 1086, each village covered an area of about 600 acres and would have had a population of less than 100. In early times the villages would have been almost entirely farmed, mostly arable farming but with a mixture of dairy farming and sheep raising.

The parish would have some of the earliest of the Somerset coal mines because here the coal seams ran obliquely to the surface. The first documentary evidence of mining in the parish dates from 1633 and the first deep mine in the parish was Mearns Coalworks which began in 1783. The wealth and work generated by the mines attracted people in and by 1800 the population had grown to about 800. In fact, production at these pits did not last very long and by 1820 most of the miners who lived in the parish worked in neighbouring villages. The Greyfield Coal Company did not start until 1833 and was at that time outside the parish. It received a boost with the opening of the railway in 1873. Greyfield Colliery closed in 1911 and the railway in 1964. 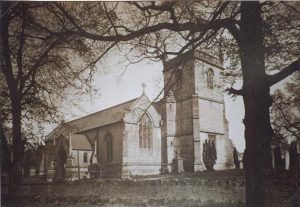 The parish has several fine houses still existing: The Grange, Hallatrow is dated 1669 and mentioned by Sir Nikolaus Pevsner in The Buildings of England. It passed through the hands of many of the notable families of the parish – the Jones, the Skeys, the Scobells and the Moggs.

More information about the buildings, institutions and notable families of the parish, including the Purnell, Scobell, Brodribb, Skey, Rees-Mogg and Jones families, and some splendid pictures appear in “High Littleton and Hallatrow – a Pictorial History”, published by the Parish Council in 1999 as a Millennium project.

Unfortunately there are no more copies available for purchase.